Every sports team has a mascot to cheer them on, but to my knowledge, no writer has ever had a mascot to barrack for them. Yet there we are, tucked away alone in our garrets with a goal to reach and the need of encouragement to get there. With this in mind, I decided to commission my neighbour, 12 year-old budding artist, Montana, to draw a mascot for me. I explained to her about my current project and we took it from there.

The brief: I’m presently working on an historical novel called Blackbird. It’s a story set in the 1880’s about a boy called Narua whose brother is blackbirded (kidnapped) from his home in the South Sea Islands and forced to work in the sugarcane fields of Queensland. Determined to find his brother and bring him home, Narua signs up to go to Australia on a recruitment ship, and so begins his search. 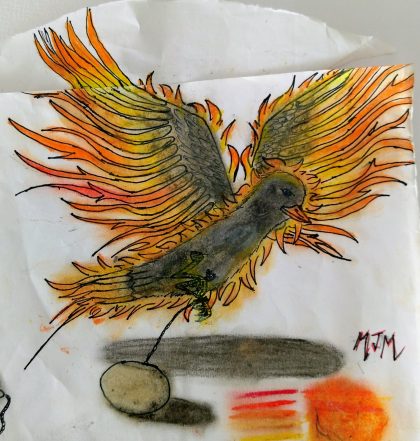 Montana decided to draw a blackbird with wings of fire, recalling the idea of a phoenix that appears to have died but is actually in the process of being reborn. This creative idea perfectly captured how the South Sea Islanders have suffered and yet their legacy survives in the contribution they’ve made to Queensland’s booming economy, and in their descendants, many of whom live in Queensland to this day. The fiery wings also tie in with the way the sugarcane fields were set on fire in order to make the cane easier to harvest.

As for the ball and chain, Montana used this symbol of slavery to show that while many islanders came to Australia voluntarily, an estimated 5000 were tricked, coerced or kidnapped. The practice finally came to an end which is why the chain in the picture is broken in two.

My new mascot is now up on my wall beside my writing desk. It’s a fabulous picture and a daily encouragement for me to keep going with my novel.

I found myself struggling with writer’s block today. I was a bug stuck to the fly paper of my plot, flapping about going nowhere. It was time to free myself and, as so often happens, that required doing something completely different. So I set aside my novel and decided to have a go at book spine poetry.

For those of you who haven’t heard of this increasingly popular art form, it’s very simple and a lot of fun.

How do you make a book spine poem?

Raid your bookshelf for interesting titles. Each title will be a line in your poem.

Arrange the titles so they run together to make poem.

Stack them in a pile and photograph it.

Send the photo to your friends and family and await their admiration!

If you have a lot of book shelves, you might want to write down where you found each book so it’s easier to put them back later. I learned this the hard way!

If you go to school, have a chat to the librarian and see if they’d be up for a book spine poetry challenge.

Here’s another one of mine, this time on a serious topic:

And a final one to close:

And remember, “There’s no money in poetry, but there’s no poetry in money, either.” (Robert Graves)

Welcome to my new blog!

As a creative writer, I thought it only fitting to devote my first ever post to creativity. With that in mind, here’s a picture of me (fourth from the left) having a cup of tea in the sea. 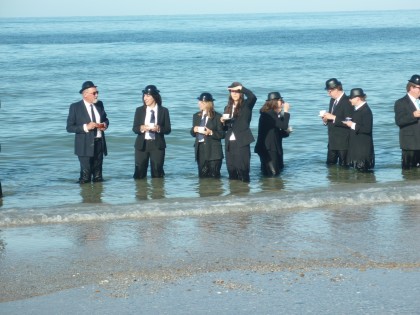 “But I’m just not creative.”

For some, creativity comes easily, for others, not so much. In an effort to conquer his writer’s block, one famous author went into his study, gave his butler his clothes and told him not to return them until he’d written three chapters. I myself even tried hypnosis!

So why go to such lengths to overcome our blocks? The way I see it, we’re born without a map. Creating stuff is how we chart the country of ourselves. 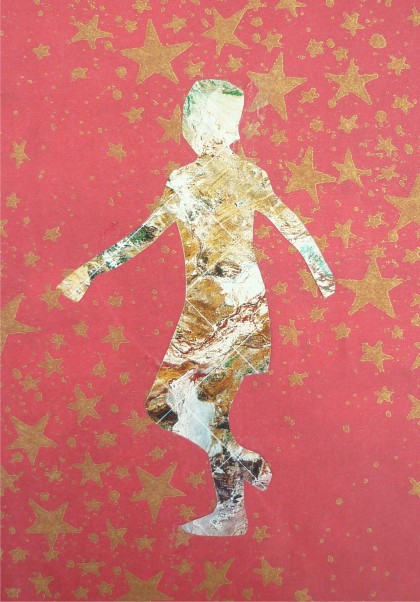 Shame researcher, Brené Brown, argues that creativity only comes when we’re courageous enough to be vulnerable. Unfortunately, being vulnerable tends to prompt shame to rear its ugly head. Shame makes us:

I’ve done all of these – still do!

I recently had the opportunity to take part in a surrealist tea party. Local artist, Andrew Baines, invited members of the public to come down to the beach dressed in a black suit, bowler hat and tie. It looked like fun, but after my initial enthusiasm, I thought: people will think I’ve lost my mind! There it was: “People will think…” Luckily, I recognised my reaction and decided to take part anyway. 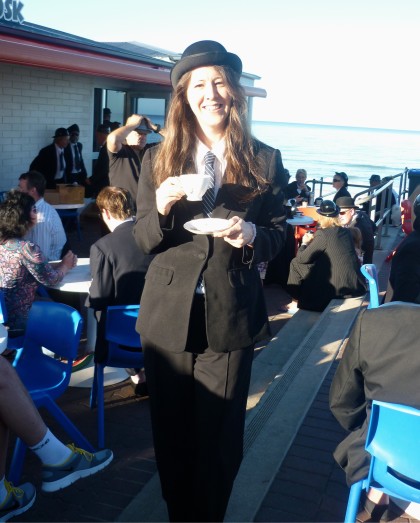 130 of us stood in the sea and drank tea while the artist took photos.

Thanks for stopping by. Should you feel so inclined, you’re most welcome to subscribe to my blog by clicking on the orange icon on the right hand side.